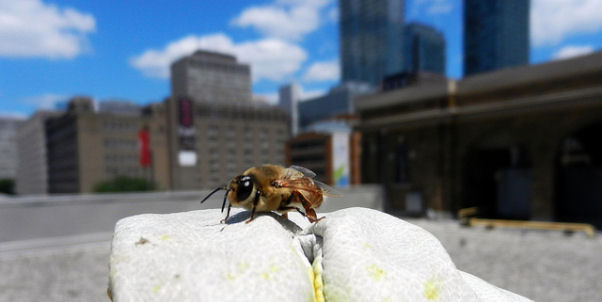 Over the last few years, the plight of the honey bee has had its profile raised in a number of ways. air max pas cher The importance of our food producing friends cannot be overstated, but one result of this public sentiment to help save them may actually end up doing them harm according to scientists. adidas gazelle uomo rosse The rise in popularity of urban beekeeping has seen many big names get in on the act and start up their own rooftop operations, among them the London Stock Exchange, the Waldorf-Astoria Hotel in New York, and even the White House.

There’s even an entire honey company that relies solely on the efforts of urban beekeeping.

However scientists from the Laboratory of Apiculture and Social Insects (LASI) at the University of Sussex have written in The Biologist that such a burgeoning practice may end up doing more harm than good. Kole Calhoun Baseball Jersey Major cities like London, New York and Toronto have brought about a 220% rise in beekeepers since 1999, while in five years alone beekeepers in Greater London tripled from 464 to 1,237. asics scarpe 2017 Professor Francis Ratnieks and Dr Karin Alton from LASI argue that such a huge increase could put a strain on the nectar and pollen supplies available to the bees in those areas.

The scientists recognise that many urban properties set up rooftop hives in order to strengthen their ‘green’ image, or to help with team-building exercises, but they point out that simply introducing more bees is not the answer. nike air max pas cher With 75% of all the land in the UK being agricultural, there is a distinct lack of areas rich in wildflowers, so introducing a greater population of honey bees into urban areas without doing anything about their source of pollen could spell big problems.

“If a game park was short of food for elephants, you wouldn’t introduce more elephants, so why should we take this approach with bees?”

“If the problem is not enough flowers, increasing the number of hives risks making that problem worse.

The honey bee is just one of many insect species which feed on nectar and pollen.

Having a high density of honey bee hives is not only bad for honey bees, but may also affect bumblebees and other species feeding on the same flowers.

Furthermore, Ratnieks and Alton warn that with so many rooftop hives being set up in metropolitan areas, the rise in inexperienced beekeepers could end up spreading certain honey bee diseases, especially American foulbrood (AFB), a highly contagious bacterial infection of the honey bee larvae.

Each new hive placed in London would need the equivalent of one hectare of borage or 8.3 hectares of lavender, so Alton suggests the honey bee cause would be better served if those concerned introduced more bee-friendly flowers and a welcoming habitat for them.