To celebrate Halloween and get in that spooky mood, we’ll be sharing a couple of posts this week about all kinds of scary goings on and how they relate to bees and honey. This week, it’s Halloween costume time!

Halloween isn’t hugely popular here in New Zealand, which is a shame. Many see it as more of an American tradition, and sure enough they can go absolutely nuts for it. Minnesota Timberwolves For me, it’s the versatility of the holiday that I find so appealing; you can celebrate it by carving up a pumpkin, watching some scary movies, or simply scoring free sweets off the neighbours. Another massively popular thing to do is dress up and go to a Halloween costume party.

We’ll get to some of the more bizarre bee-related costumes you can try out while scaring the night away, but first I thought I’d share some amazing t-shirt designs I’ve found recently, all to do with what is now my favourite new word, Zombees!

If you’ve ever been to a Halloween fancy dress party, then you’ve probably seen someone wearing a bee costume. Hey, if it’s good enough for Beyonce then it’s good enough for us common folk. Usually you’ll get two types of people who wear bee costumes; either the “crazay” guy who dresses like a fat bee and bounces into you all night, or the girl trying to look sexy in her black and yellow striped stockings and short black and yellow corset/miniskirt combination. Both are pretty boring, so I thought we’d have a look at some more “imaginative” bee costumes we bedeck ourselves or others out in. First off…

As we all know, the best thing about being a parent is dressing your kids in the most ludicrous clothes you can find to make them look utterly ridiculous, then sitting back and laughing at them as they look dumb-founded as to why you’re laughing. There are only a few short years you can do this for before they’re old enough to realise they’re being made fools of for your amusement.

I’ve noticed that the problem with many of the bee costumes you see is that our silly old human legs get in the way. Asics Gel Lyte 5 damskie A bee costume can look great but the effect is somewhat ruined by two big legs sticking out the bottom of it and making it look like a bizarre humanoid bee on stilts. Thankfully this is where babies come in. chaussures de foot umbro Since they don’t really need their legs for the first year or so, you’ve only got one Halloween with which to dress them up as the most authentic bee a human can muster. May we present some offerings…

This little guy is cute, and he’s totally rocking this bee costume, with a little flower just to bump up the cuteness or maybe make some kind of statement about the importance pollination. Either way he’s a little too cute, so much so that he looks more cute than he does ridiculous. That’ll never do, time to move on.

That’s more like it. Ill-fitting clothes are always the first port of call when making your child look ridiculous, and the fact that he looks like he’s actually being swallowed by the bee costume rather than wearing it really adds to the overall effect.

The face says it all. Crocheting was a bold choice, and it’s made this poor little guy look like one of those toilet roll dolls. adidas gazelle hombre Even his antennae are sad.

Ok so they’ve reneged on covering up the legs, which should rule them out of this list, but it was just too ridiculous not to include. I mean come on, who in their right mind would dress their kid up like this? I like to make my kid look silly as much as the next parent, but this is just cruel.

Some Halloween costumes have a ridiculous amount of thought and energy put into them, and those that are pulled off are always greatly appreciated. The creativity some people show with an original idea brilliantly executed can be quite staggering. Then you get these guys, who make you stop and stare just as much, but for very different reasons…

Oh. adidas zx 700 mujer OH. Oh right! You’re a bee and a B! That’s genius. Canotte Cleveland Cavaliers Also you’re wielding a machete! Because why not.

This guy has never been familiar with the word subtle. Gone is the attempt at looking like both a bee and the letter B, and in its place are lazy fake muscles. Not to be outdone by our previous effort’s machete, this bee will slaughter us with a chainsaw because WHY NOT!

I don’t know what it is – maybe it’s the dead lifeless eyes and raised eyebrows staring into our souls. Perhaps it’s the creepy frozen smile. Or maybe it’s the bizarre and mutant duck feet that make this costume utter nightmare fuel. If you saw this freakish bee-duck apparition standing around smiling at everyone at a Halloween Party, don’t tell me you wouldn’t be freaked out.

That’s right, people even go so far as getting their animals in on the action. New Balance 574 Pas Cher It makes a weird kind of sense really. You can only dress your kids in a ridiculous bee get-up for so long, but with animals you can do it every Halloween, or every day if you’re completely insane. May we present some of the greatest attempts from around the interwebs…

I think this is a dog, maybe? It could just as easily be a baby Wookie, but whatever it is, it’s looking mighty suspicious of being forced to look like a bee.

If you’re going to dress a cat up as anything, let alone as a bee, then you can’t expect any other look on its face than this.

This little guy looks like he has already formulated his plan for getting revenge on his owner. Rats are wily at the best of times, but a rat dressed as a bee is downright vengeful.

Ok this guy is great. Anyone who has guinea pigs (and are so inclined) knows that they are the best animals to put little clothes and little hats on. This great effort has gone even further, because it’s the little glasses that really tie the whole look together, and elevate this guinea pig to looking like some kind of well-read guinea-bee librarian.

But for every superb guinea pig dressed as a bee, there are about six depressed dogs dressed as bees. This poor little guy looks like he has given up all hope of revenge on his owner, and is simply crying out for help through those sad and dejected eyes. 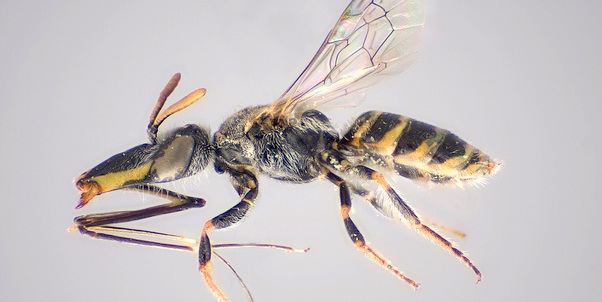 When people think of bees, they usually think of the humble Bumble or Honey Bee, but in fact there are only around 250 species of the former, and an even smaller 10 species of the latter. Nike Air Max Thea Dames The vast majority of the other approximately 19,700 species of bees come in all shapes, sizes and colours, some of which we’ve mentioned before.

Now an article published in Auckland by an Ontario-based researcher has identified 21 more, pushing the world’s total known bee species past the 20,000 mark. All the newly identified species belong to the genus Mexalictus, which are mostly found in high elevations between Arizona and Panama, asics gel nimbus mujer with some being discovered in Guatemala, Honduras, New Balance 1600 damskie and Nicaragua.

<span style="font-family: georgia, nike air max 1 uomo palatino;”>Unlike your common or garden Honey or Bumble Bee, Nike Air Huarache Dames these new species are very rare, some only known to science due to the discovery of one specimen. New Balance 515 hombre Like most other bees found in the world, these new species are likely solitary and nest in the ground or in twig hollows, Nike Air Max 2017 Dames roze however no nests have yet been found. As the researcher Sheila Dumesh says, “Because their habitats are often imperilled from deforestation and climate change, finding them before they become extinct is a race against time.”

<span style="font-family: georgia, chaussures asics homme pas cher palatino;”>Despite not being as well known to the general population as their honey-making cousins, many thousands of other bee species also pollinate plants and crops. York bee lab leader Professor Laurence Packer explains, “Documenting what these wild bee species are and what they do, as well as understanding their role in agriculture and our planet’s overall ecology is all extremely important.”