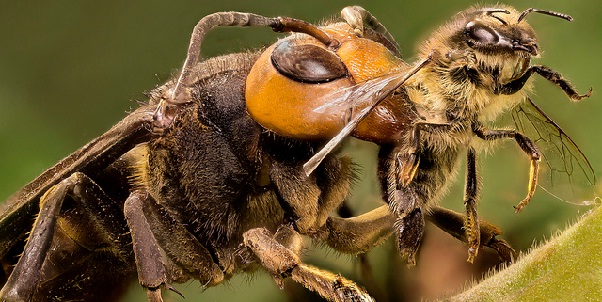 When most people think of honey bees they either consider them being horrible stinging death machines, or serently flittering from flower to flower collecting pollen amid a picturesque scene of pastoral beauty. Neither is very true, as the life of the honey bee is a difficult one, with many predators to stay away from.

A new study from the scientific journal PLOS ONE suggests that such fear drives bees to avoid food sources closely associated with predators and, interestingly, makes colonies of bees less risk-tolerant than individual bees.

James Nieh, a professor of biology at UC San Diego, worked with scientists at Yunnan Agricultural University in China to study the impact on foraging Asian honey bees of the monstrous-looking Asian Giant hornet, Vespa tropica, and a smaller hornet species known as Vespa velutina, which has invaded Europe and now poses a threat to European honey bees.

“This strategy of colonies collectively exhibiting significantly more caution than the riskier individual foragers may help honey bees exploit all of the available food sources, with some intrepid foragers visiting more dangerous food while the colony judiciously decides how to best allocate its foraging,” Nieh.

“The Asian Giant hornets are dangerous, heavily armored predators,” says Ken Tan, the first author of the paper. “Bee colonies respond by forming balls of defending bees, encasing the hornet and, in some cases, cooking it to death with heat generated by the bees.”

The researchers found that bees treated the bigger hornet species, which is four times more massive than the smaller species, as more dangerous. nike tn requin In a series of experiments, they presented bees with different combinations of safe and dangerous feeders—depending on their association with the larger or smaller hornets—containing varying concentrations of sucrose.

“Bees avoided the dangerous feeders and preferred feeders that provided sweeter nectar,” says Nieh. “However, predators are clever and can focus on sweeter food, ones which bees prefer. So we also tested how bees would respond when sweeter food was also more dangerous. What we found was that the individual bees were more risk-tolerant. They avoided the giant hornet at the best food, but continued to visit the lower quality food with the smaller hornet.”

The study demonstrated two classic effects of fear: changing prey foraging durations and space use. Fjällräven Kånken Salu Predator presence reduced the bees spent collecting food by 17–33% and elicited bee avoidance, decreasing visitation to dangerous feeders by. This falls into line with such avoidance techniques by other animals, such as Redshank birds which spend less time foraging in saltmarshes on days with high predation risk from sparrowhawks. Wild herbivores in the African savanna prefer low tree density areas where predators are easier to detect. Nike Air Max 2017 Dames blauw

Aerial predators of honey bees, like hornets, can capture bees in flight and may therefore have a larger spatial influence than sit-and-wait predators, which are more localised.

Such aerial insectivores may reduce plant fitness and mean colonies avoid what would otherwise be considered perfectly good food sources.

This fascinating study showed that colony foraging, the result of mass recruitment, was more affected by fear than individual foraging choice. Mass recruitment is a key foraging strategy of highly social bees, which are also important pollinators in ecosystems around the world. Thus, understanding the emergent effects of fear at the superorganism level, how colonies differ in fearful behavior from their individual members, will provide a better understanding of how fear has shaped the evolution of bee foraging and how the effects of fear can be amplified at the colony level, thereby exerting a wider effect on a vital ecosystem service, pollination.

via PLOS ONE and UCSD.